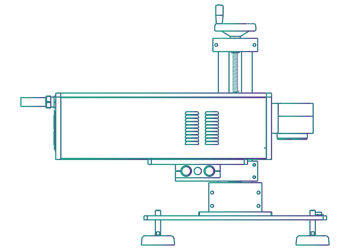 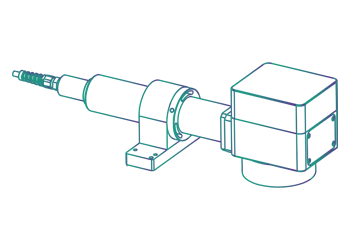 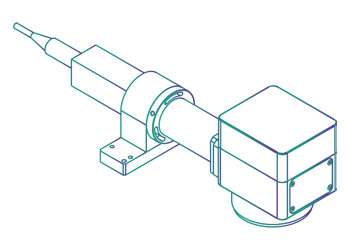 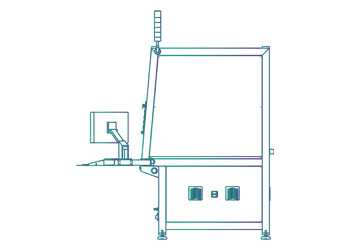 Indelible and high quality graphic coding; total reliability and non-stop productivity. Without consumables or residues. Light does not pollute!

Laser marking is a “contactless printing” technology that offers a number of indisputable advantages over alternative methodologies.

Arca Labeling & Marking designs a wide range of laser marking machines for all applications and markets.

An investment with a certain and easily quantifiable return.

Arca offers a complete range of laser markers, accessories, protections, aspirators that allow the optimal use of laser technology to be applied on any material. 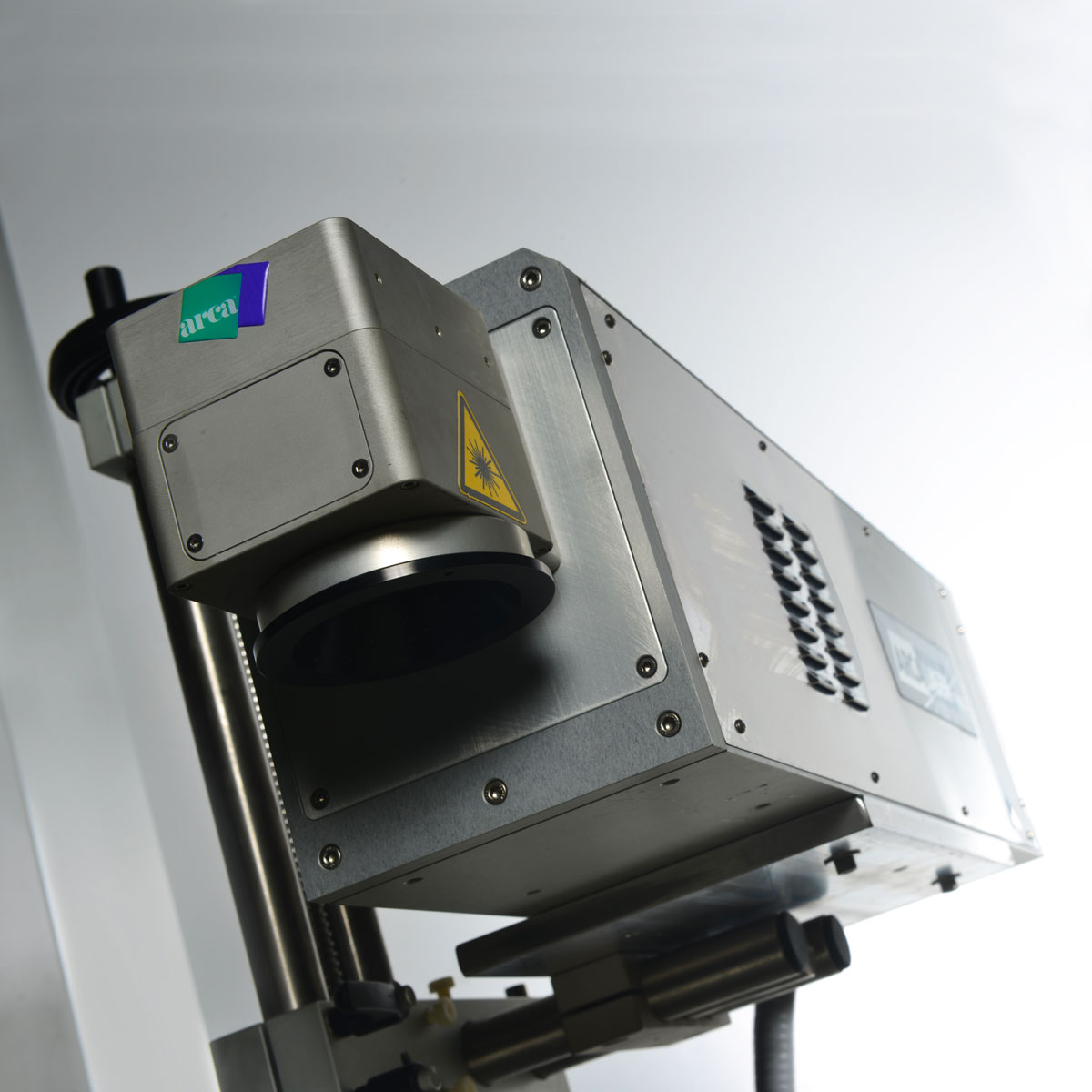 Indelible and high quality graphic coding; total reliability and non-stop productivity. Without consumables or residues. Light does not pollute!

Laser marking is a “contactless printing” technology that offers a number of indisputable advantages over alternative methodologies.

Arca Labeling & Marking designs a wide range of laser marking machines for all applications and markets.

An investment with a certain and easily quantifiable return.

Arca offers a complete range of laser markers, accessories, protections, aspirators that allow the optimal use of laser technology to be applied on any material.

The laser markers available on the market are distinguished in the first place by the laser sources mounted inside them: mainly we are talking about CO₂ and fiber laser marking machines. 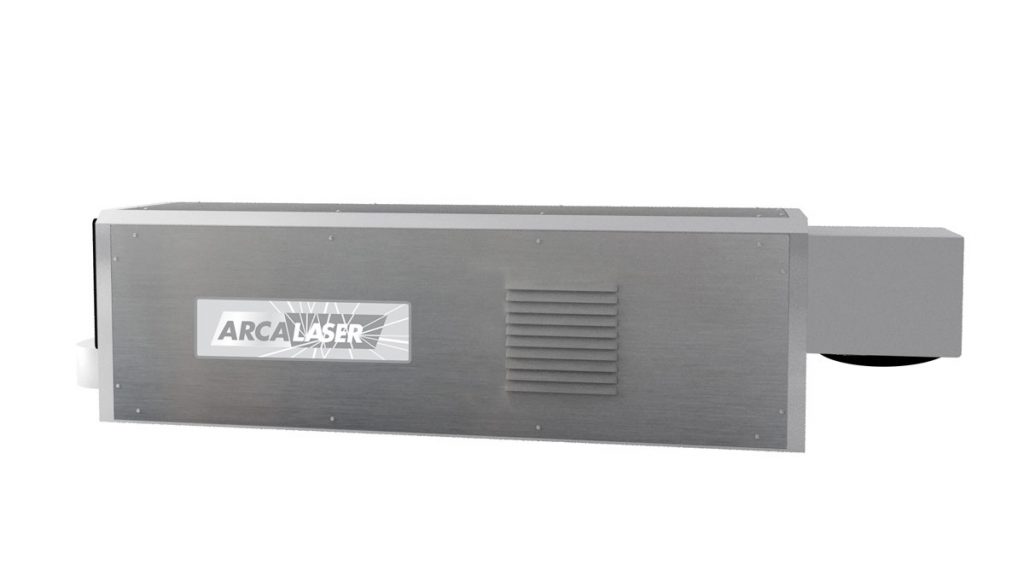 CO2 laser markers use gas lasers based on a gaseous mixture of electrically excited carbon dioxide with a wavelength of 10.6 micrometers. This type of laser marker is particularly suitable for processing organic materials and most plastics.

The CO₂ range of laser marking machines is perfect for any type of production line: even those with high speed.

This is because the power of the laser marker can be modulated: Arca has created a range that goes from 10 Watts to 80 Watts. 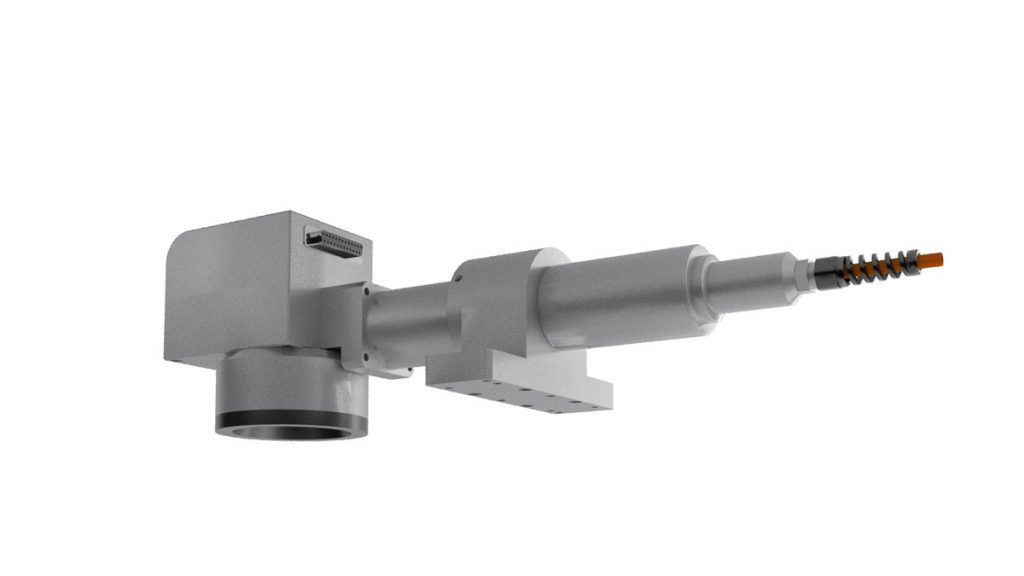 Laser fiber markers produce the laser beam by means of a so-called laser seed and amplify it in specially mounted glass fibers supplied with energy by means of pumping diodes. With a wavelength of 1.064 micrometers, fiber lasers produce a particularly small focal diameter, which means that the intensity per unit area is up to 100 times higher than that of CO₂ laser markers for the same average power emitted. The fiber laser is particularly suitable for metal marking, metal engraving and particularly high-contrast marking of plastics. Laser fibers are basically maintenance-free and stand out for their long service life.

A particular type of laser fiber is the MOPA laser, in which the duration of the pulses is adjustable. This makes the MOPA laser one of the most flexible lasers ever that can be used in many applications including color laser marking on steel.

They are suitable for these materials: metals, coated metals, plastics.

Laser marking machines guarantee a series of important advantages over all other printing systems:

No consumables to pay, order and manage in stock.

No waste to dispose: no TT ribbon support or empty ink cartridges.

Laser marking point on the label defined via software, without any mechanical adjustment and, where the marker is placed directly on the detacher: 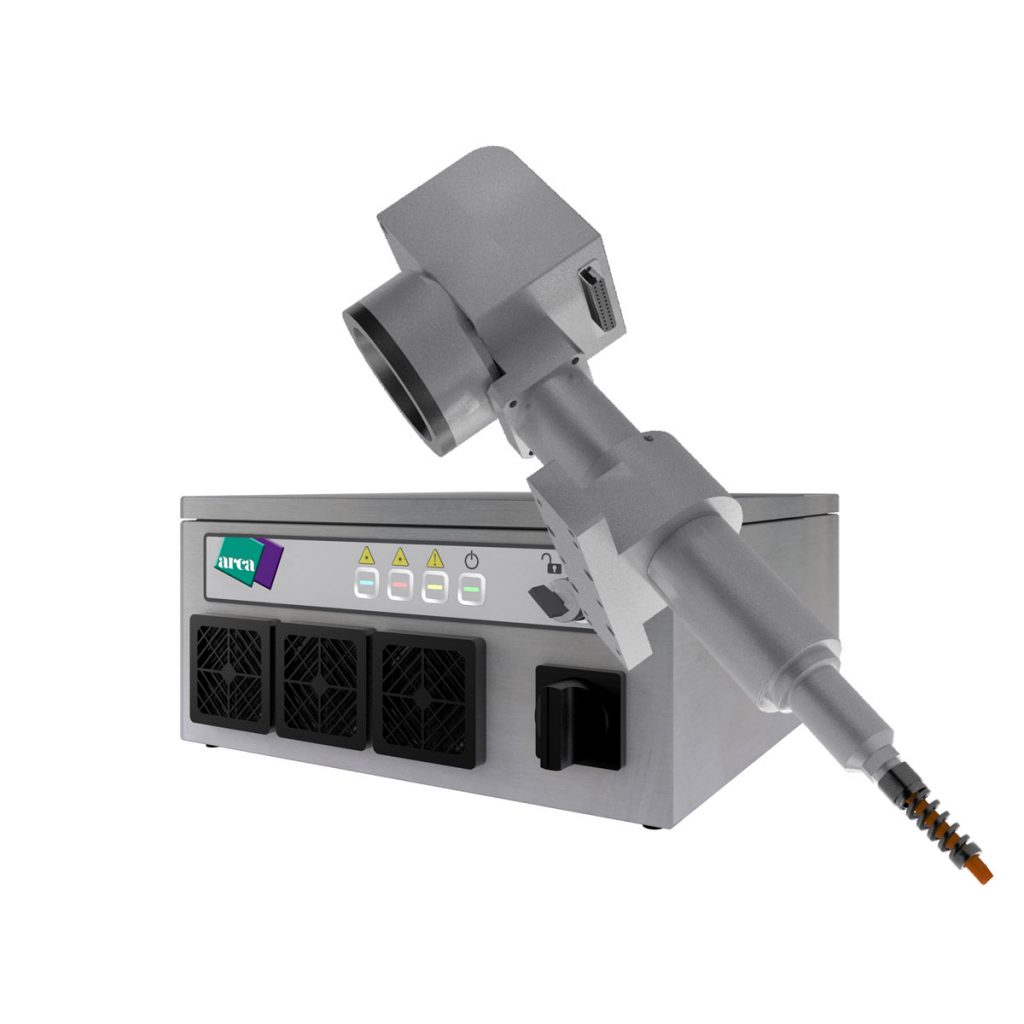 The DPSS (Diode Pumped Solid State) laser is the best choice among laser markers when it comes to quality. In the world of laser marking machines, LED technology stands out for its unique physical characteristics and performance: high power of the emission pulses (useful for engraving and cutting metals), and focus points that can reach a few tens of microns.

This laser marker works across short wavelengths (in the case of our products in the UV and Green spectrum) which are ideal for processing “complex” materials such as metals and transparent fibers.

Thanks to short high-energy pulses, this laser marker therefore does not excessively increase the temperature of the target surface, so as to avoid the creation of burrs, unexpected colors and structural alterations.

The choice of this laser marking machine is therefore ideal for minimizing imperfections and damage on the processed product. 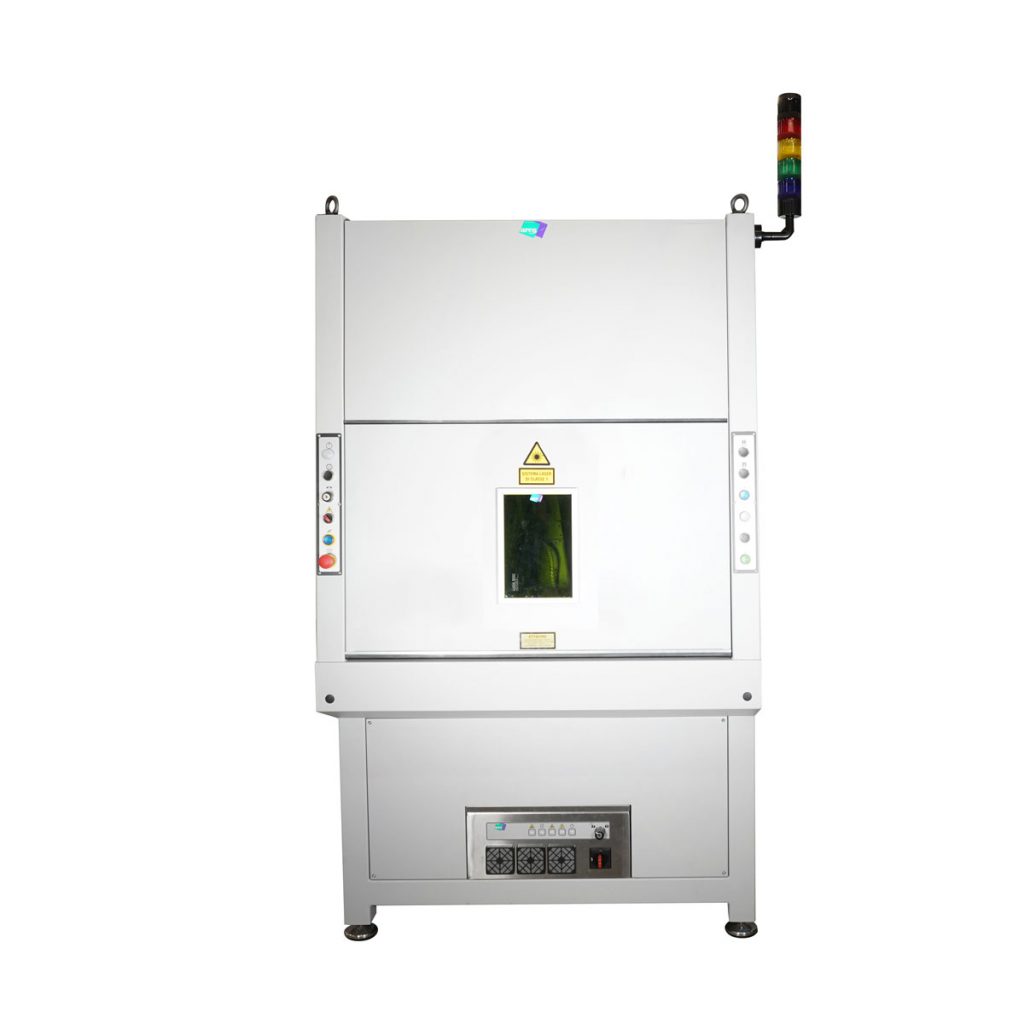 The Arca laser marking station can be used as a standing or seated workstation. On specific requests, we equip this machine with linear axes in x and y direction and rotation axes with different clamping systems.

For integration into a production chain, this marking station allows for the longitudinal transport of the pieces. The side openings make it particularly accessible.

The Arca marking station is able to satisfy all customer needs thanks to its flexibility and suitability for numerous types of applications in every sector from automotive to pharmaceutical.

The marking station is compatible with all Arca marking lasers.

Laser marking has many applications as it is the most flexible printing technology and is suitable for practically all substrates.
One of the main sectors in which the laser marker comes is the automotive. Any piece that requires traceability can be engraved via metal laser marking or laser marking on plastic.
It is therefore not surprising that a laser marker is used to transfer indelible marks even on pieces that have to work tirelessly in industrial environments with extreme conditions.

Laser marking machines are also ideal for micromachining. During manufacturing, they can prove to be useful working tools to carry out selective ablation of surface treatments or the removal of protective sheaths. These treatments are used to promote strong welds, or stable and safe electrical connections.

Laser marking machines are also widely used in electronics and microelectronics. The components of the circuits that make up the beating heart of devices such as smartphones, laptops, electric cars and much more, are quite delicate when the body is open. To ensure that serialization by marking does not compromise the functioning of the components, the laser marking machine is preferred over the now obsolete CNC milling machines.
So as to limit the dispersion of material that can create short circuits on the electronic board.

Laser markers are also used to print quality logos and marks on a piece that travels along the production line. The precision guaranteed by the machines is state of the art and the high contrast visual effect cannot be altered by atmospheric agents or chemicals. Thanks to this technology, mass customization has become an accessible possibility for companies with production lines with the characteristics of Industry 4.0.

The laser markings are also perfect for photoengraving on metal panels. The laser manages to blacken the surface through heat, thus reproducing the industrial logo or other graphic elements.